A new version of colors - the game is available on the app stores.

colors is an HTML5 app wrapped with Cordova to bring it to the app stores. Like we did with F.A.T.Z  we learned a lot of things along the way.

Many users stopped using the app when they were in the middle of the game. We tried to give them more information to understand the game even if they never played it before.


We also changed the game mode: While in older versions you just were punished for wrong choices now the game ends immediately if you touch a wrong color. We think this will help the player to understand the game even quicker. Also most players abort the game after making an error anyway, because after that there is no chance to break the high score anymore.

Our focus was to write clean, readable, maintainable and decoupled javascript code.

We used require.js to support that goal. Even though require.js is a great piece of software, we might use Browserify in the future. It's less boilerplate and integrates in a good way with our node.js work. Even though we don't like the build step that comes with Browserify.

A cool way to integrate cordova with require.js might be the following attempt.


If you declare cordova in the require.js config with optional paths you can easily implement a fallback file for testing in the browser where you have no cordova.

As in the past we used Backbone. We separated data, views and game logic in the following structure:

This worked pretty well as we changed the game logic a few times. The hardest part with Backbone is to control your subviews. We've implemented a BaseView that can handle multiple subviews to change them if the model changes or delegate user input to the viewController.

Backbone.localStorage helped us to store user settings and local high scores on the device. For our global high score we used Parse.com.

The concept behind WoE - War of Elements

WoE - War of Elements is our contribution for the js13kGames competition 2014.

It's a multiplayer game you can play with your mobile phone. It's designed for up to 4 players. The goal of the game is to "shoot" the green circles. The first player to 10 hits will win the game.

But you will soon recognize when you go over to the js13k website and try to play our game that's it not a normal mobile multiplayer game. Because you can't play it alone. That's not that unusual for a multiplayer game you will say. But with WoE it's different.

WoE is meant as a multiplayer game you should play with gamers sitting next to you. Because your mobile phone is just a controller  and all the user interaction is happening on one screen. This concept isn't new either, it's what classic console games stand for.

But for WoE you don't need a console. All you need is a (big) screen and friends with smartphones. That's it. Of cource your mobile phone and the desktop should be both connected to the internet and your browser in use shouldn’t be that old. But for most gamers around that shouldn’t be a problem.

So the concept covers the following things:


But we feel this way of playing could be a new way to look at (mobile) (multiplayer) (console) games.
Email ThisBlogThis!Share to TwitterShare to FacebookShare to Pinterest

10 hours left before the deadline and we're through.

We submitted our game "WoE - War of Elements" for js13kgames this night. It's a multiplayer game you can play with your smart phone. But the fun thing is, you can sit near to each other, while playing agains each other.

To start a game just open a new room on you desktop computer or any device with a big screen (as long as it supports websockets :-)). Then you can join the game with your mobile phone. 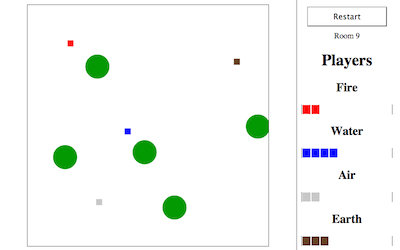 Touch the screen and tap the circles before an other player can tap it. The first player to 10 points will win the round.

WoE is a prototype using node.js and socket.io to run. It looks like a prototype and sometimes it feels like one. But it's a good start.

And you can find the code at github: https://github.com/codelooksgood/woe.

Update: You can now play the game at the js13kgames website: http://js13kgames.com/entries/woe-war-of-elements
Email ThisBlogThis!Share to TwitterShare to FacebookShare to Pinterest

Since F.A.T.Z is available at the Apple and Android App Store it’s time for us to take a look back at the last year. We think it’s important to document the progress we’ve made.

Most of the time it will help us to remember the best practices we came up with. And maybe from time to time we will be able to help others with our solutions.

And of course since this is our start as mobile web app developers, we’re hoping to get proper feedback to improve our code. So we’re aware of the fact that our solutions may not be perfect (or sometimes are just crap) and we hope that by documenting our learnings we’ll get new ones along the way.

Read more »
Email ThisBlogThis!Share to TwitterShare to FacebookShare to Pinterest

You can finally download F.A.T.Z from the App Store and Play Store:

colors is not about having fast fingers, because we know you have. It's about not getting tricked by your head.

Touch the alphabet from A to Z. Do it as fast as you can and try to beat the best players around the world.